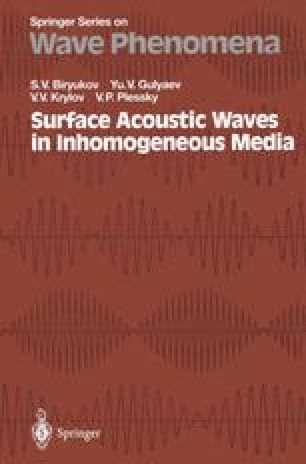 Waves in a Half-space with Account of Surface Effects

Up to this point we considered the surface acoustic waves propagating in one or another inhomogeneous medium and did not concern ourselves with either the methods for producing the solid surfaces or their influence on the surface wave properties. Meanwhile, even in the case when a free surface is formed by cutting along the cleavage planes, i.e., when the surface is perfect, there is always a near-surface imperfect layer with properties which differ from those of the bulk medium since the upper surface atoms are under different conditions than those in the bulk media [15.1-4]. In this case there is a stressed state within the layer, and the near-surface atoms are characterized by other constants of elastic interaction. The thickness of a disturbed near-surface layer usually has the order of interatomic distance in a crystal lattice, i.e., is equal to 2-5 Å.

Surface Tension Rayleigh Wave Surface Acoustic Wave Surface Effect Surface Parameter
These keywords were added by machine and not by the authors. This process is experimental and the keywords may be updated as the learning algorithm improves.
This is a preview of subscription content, log in to check access.