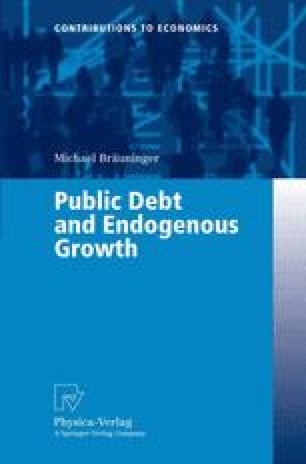 The Solow Model of the Small Open Economy

This chapter considers public debt in a small open economy. Most of the literature on endogenous growth in open economies concentrate on trade effects as introduced in Grossman and Helpman (1991). In these models there is no capital mobility. In contrast to this literature we allow for capital mobility and concentrate on intertemporal trade as in Buiter (1981) and Frenkel and Razin (1987). So opening the economy adds the dynamics of foreign debt growth. The production structure is assumed to be of AK type and households are assumed to save a constant fraction of their disposable income. The basic model, without public debt, is presented in Carlberg (1997).

Public Debt Budget Deficit Capital Growth Small Open Economy Foreign Asset
These keywords were added by machine and not by the authors. This process is experimental and the keywords may be updated as the learning algorithm improves.
This is a preview of subscription content, log in to check access.