Geometry and Topology of Configuration Spaces 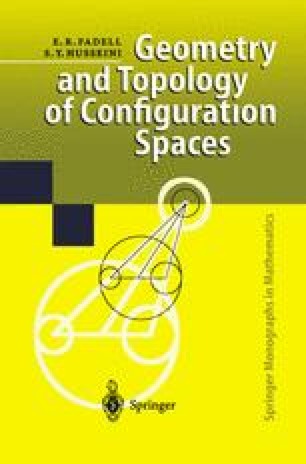 Geometry and Topology of Configuration Spaces pp 269-291 | Cite as

In this chapter we prepare the ground for our applications to problems of the k-body type, to be presented in Chapter XIV. We are chiefly motivated by the notion of neighborhoods of infinity, introduced in [8, Bahri-Rabinowitz] in their study of 3-body problems. Intuitively speaking, the neighborhoods of infinity consist of configurations of three bodies that separate into simpler clusters moving away from each other. Another approach that deals with this is that of admissible and non-admissible sets, introduced in [75, 76, 77, Majer-Terracini]. In an attempt to bring the two points of view together, we offer the concept of ends. This concept makes it possible to adopt a variational approach that depends on the use of a category theory of the relative type.

Closed Subset Homotopy Type Relative Category Homotopy Equivalent Singular Homology
These keywords were added by machine and not by the authors. This process is experimental and the keywords may be updated as the learning algorithm improves.
This is a preview of subscription content, log in to check access.