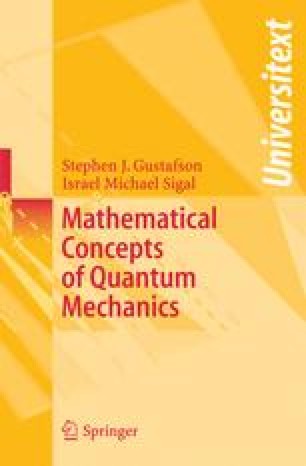 In this chapter we extend the basic notions of quantum mechanics to the situation of open systems and positive temperatures. This topic is called quantum statistical mechanics. Since the notion of temperature pertains to systems with an infinite number of degrees of freedom — infinite systems — which are in states of thermal equilibrium, we should explain what the first sentence really means. By a quantum system at a positive temperature, we mean a quantum system coupled to an infinite system which is initially in a state of thermal equilibrium at a given temperature. In what follows, we develop a mathematical framework with which to handle such situations. We will see that we will have to replace the notion of wave function (i.e. a square integrable function of the particle coordinates — an element of L2(ℝ3)) with the notion of density matrix, a positive, trace class operator on the state space L2(ℝ3). The notions of ground state and ground state energy go over to the notions of Gibbs state and (Helmholtz) free energy. We consider some element ary examples and formulate some key problems. The notions of trace and trace class operators will be defined in the “mathematical supplement” at the end of this chapter.

Partition Function Density Matrice Ground State Energy Thermodynamic Limit Trace Class
These keywords were added by machine and not by the authors. This process is experimental and the keywords may be updated as the learning algorithm improves.
This is a preview of subscription content, log in to check access.