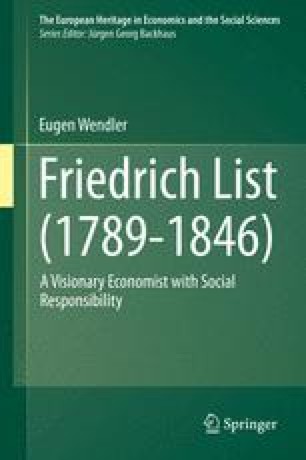 Chapter
Part of the The European Heritage in Economics and the Social Sciences book series (EHES, volume 16)

After the List family had abandoned all hope that Elise might have a career in music, they decided to seek employment for her as domestic help, as was normal for the daughters of bourgeois families at the time. Because she had a good command of the English language, the Lists believed it would be a good idea for her to work for an English family in Paris. Unfortunately the family did not offer their shy, young employee an adequate position, but treated her as a servile maid. A dispute broke out when Elise illicitly received a guest in the salon of the family. The Duke of Larochefoucauld, with whom her father Friedrich had been acquainted during his exile in Paris, came to visit Elise at the home of the English family. Deciding it would be inappropriate to meet with him in her small room, she decided to sit with him in the salon. This faupas was evidently unforgiveable: the English Madame made such a fuss that Elise wanted to return to Augsburg immediately.

Free Trade Trade Agreement Potato Starch German Industry English Family
These keywords were added by machine and not by the authors. This process is experimental and the keywords may be updated as the learning algorithm improves.
This is a preview of subscription content, log in to check access.