The Computation of Fixed Points and Applications 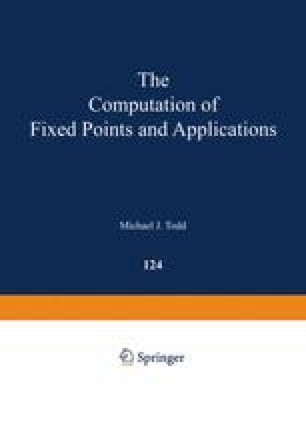 Probably the most famous fixed-point theorem states that a continuous function from a closed n-cell to itself leaves at least one point fixed. The Dutch mathematician L. E. J. Brouwer proved this result in 1912 [5] using degree theory. An equivalent theorem in the case of differentiable functions was proved earlier by Bohl [4], who used Green’s theorem. Our concern is more with the computation of fixed points than their existence; we will follow a later approach based on the purely combinatorial lemma of Sperner [62]. This approach is closest to the algorithms we shall develop, and the machinery will be of value later. However, to avoid some of the cumbersome details, we will give only an intuitive idea of the notions of simplex and triangulation. A rigorous treatment appears in Chapter III.

Inductive Step Regular Triangulation Standard Simplex Approximate Fixed Point Equivalent Theorem
These keywords were added by machine and not by the authors. This process is experimental and the keywords may be updated as the learning algorithm improves.
This is a preview of subscription content, log in to check access.