Degeneracy Graphs and the Neighbourhood Problem 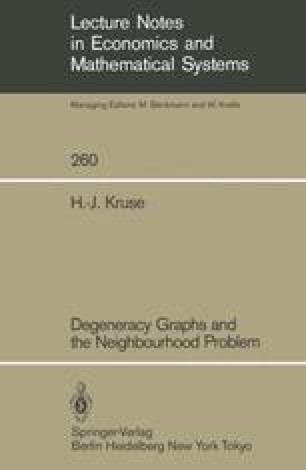 Degeneracy Graphs and the Neighbourhood Problem pp 10-33 | Cite as

In some problems of the theory of convex polytopes one uses the possibility of representing a convex polytope as a(n) (undirected) graph1). Thus it is for example possible to reduce the problem of determining all vertices of a convex polytope to the problem of determining a spanning tree2) of the corresponding graph. Among other things, this approach is used in the procedures developed by MANAS/NEDOMA [1968] and DYER/PROLL [1977]. In their survey MATTHEIS/RUBIN [1980] call these procedures pivoting methods3). In case of degeneracy, however, the application of these procedures involves a considerable computational effort. This is due to the fact that a large-scale degeneracy of a convex polytope entails an increasing complexity of the corresponding graph (or certain subgraphs). This has been explained in particular by GAL [1978a] when dealing with the problem of determining all neighbouring vertices of a degenerate vertex of a convex polytope 4). In the above paper the structure of these special graphs (or subgraphs) is for the first time considered to be a theoretical object of investigation.

Representation Graph Internal Node Linear Inequality Convex Polytope Neighbouring Vertex
These keywords were added by machine and not by the authors. This process is experimental and the keywords may be updated as the learning algorithm improves.
This is a preview of subscription content, log in to check access.