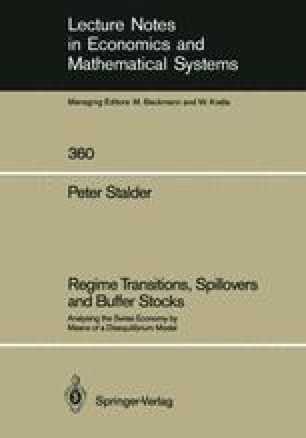 This section addresses the question whether the estimated parameters can be regarded as structurally stable. One may be sceptical about this point in particular with respect to the spillover coefficients (k and τ), the elasticity of intertemporal substitution in labor supply (d4) and the various dy-namic adjustment speeds (λy, λL, σL, λI, λG and d5) as all these parameters are likely to depend on the state of expectations of firms and households and thus may be expected to vary over time. But structural instability may be suspected for other parameters as well, due for instance to a changed composition of aggregates or the emergence of new technologies. In the following, we try to shed some light on this issue in two ways. First, we simply re-estimate the model over the shortened period 1967.2 to 1980.4 (removing the last cycle 1981.1 to 1985.4 from the original sample) in order to see which parameters are subject to the most significant shifts. Second, we perform a more formal post-sample stability test, confronting the model’s forecasts with truly ‘new’ data for the period 1986.1 to 1989.4 (data that have not been used in the ‘search process’ leading to Model 4).

Labor Supply Forecast Error Structural Instability Capital Productivity Adjustment Speed
These keywords were added by machine and not by the authors. This process is experimental and the keywords may be updated as the learning algorithm improves.
This is a preview of subscription content, log in to check access.