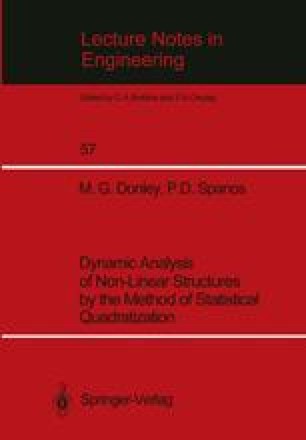 In this chapter, analytical expressions are derived for the linear and quadratic potential wave forces acting on a moored, vertical, and surface-piercing cylinder. The forces are described by a second order Volterra series with the linear wave elevation as the input function. The linear and quadratic transfer functions which define the Volterra series are derived based on linear diffraction theory. As discussed in Chapter 1, several potential forces are to be derived. These are the linear potential force, the quadratic wave elevation force, the quadratic velocity head force, and the quadratic body motion force. The resulting expressions are verified against existing solutions as available. The last section of this chapter describes how the linear and quadratic transfer functions for potential forces on a TLP which consists of four cylinders are obtained from the force transfer functions for a single cylinder. Further pertinent numerical results are presented.

Velocity Potential Velocity Head Volterra Series Wave Elevation Linear Transfer Function
These keywords were added by machine and not by the authors. This process is experimental and the keywords may be updated as the learning algorithm improves.
This is a preview of subscription content, log in to check access.