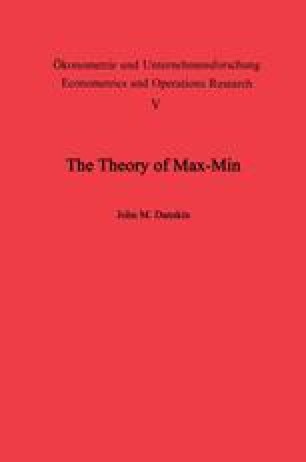 The particular problem treated in this chapter was first posed8 for the purpose of studying the theoretical differences between “percentage vulnerable” systems, in which the action of the counter y on x was of the form xe−αy, and “numerically vulnerable” systems, in which this action was represented by xe−α y/x. A typical example of the first is search for submarines, in which the number of undetected submarines is equal to the number present times the probability that each submarine is not detected. With twice as many submarines and the same search effort, the number of detections (and survivals from detections) is twice as great. A typical example of the second is an attack on Minuteman silos, in which the countering effort y must be parcelled out in amounts y/x to each of the silos. The quantity xe−α y/x then gives the number of surviving silos. In this case, doubling the number of silos will not double the number of kills with a given counter-effort: it will increase it, but in a more complicated way. What was needed was a theoretical basis for selecting among these systems, taking account of their military values and vulnerabilities α.