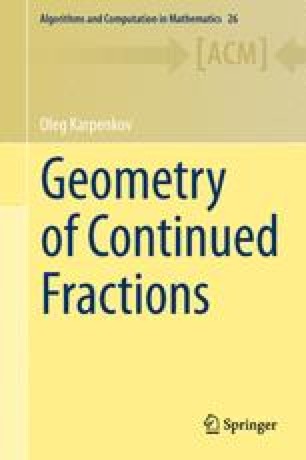 We start with a geometric interpretation of odd or infinite continued fractions with arbitrary elements in terms of broken lines in the plane having a selected point (say the origin). Further, we consider differentiable curves as infinitesimal broken lines to define analogues of continued fractions for curves. The resulting analogues possess an interesting interpretation in terms of a motion of a body according to Kepler’s second law.

Regular Continued Fraction Broken Line Interesting Interpretation Geometric Interpretation Angular Density
These keywords were added by machine and not by the authors. This process is experimental and the keywords may be updated as the learning algorithm improves.
This is a preview of subscription content, log in to check access.