Intention Recognition, Commitment and Their Roles in the Evolution of Cooperation 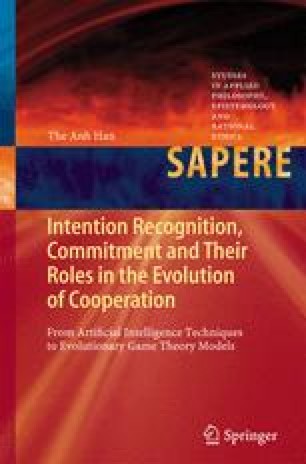 Intention Recognition, Commitment and Their Roles in the Evolution of Cooperation pp 109-121 | Cite as

The Emergence of Commitments and Cooperation

Over the last few years, several mechanisms have been pointed out to promote the emergence and maintenance of cooperation. From group and kin relations, memory and reputation based reciprocity mechanisms, to social diversity and context based reactions, grounded or not on incipient levels of cognition, there has been a large improvement on our capacity to understand the roots of animal and human cooperation (Axelrod and Hamilton, 1981; Axelrod, 1984; Hofbauer and Sigmund, 1998; Nowak, 2006b; Santos et al., 2008; Sigmund, 2010; Han et al., 2011a,b). They are certainly hugely important, but are they sufficient? Or, as many have suggested (Boehm, 1999; Hirshleiffer, 1999; Humphrey, 1999), might there be other routes to social behavior that have been neglected? Certainly there are. Commitment, which amounts to expressing an intention rather than having it recognized, may stand as another route to cooperation, even in its simplest form, as we purport to show here.

Punishment Cost Evolutionary Game Theory Execution Move Commitment Strategy Intention Recognition
These keywords were added by machine and not by the authors. This process is experimental and the keywords may be updated as the learning algorithm improves.

Cite this chapter as:
Han T.A. (2013) The Emergence of Commitments and Cooperation. In: Intention Recognition, Commitment and Their Roles in the Evolution of Cooperation. Studies in Applied Philosophy, Epistemology and Rational Ethics, vol 9. Springer, Berlin, Heidelberg. https://doi.org/10.1007/978-3-642-37512-5_7