Comparative Issues in the Governance of Research Biobanks 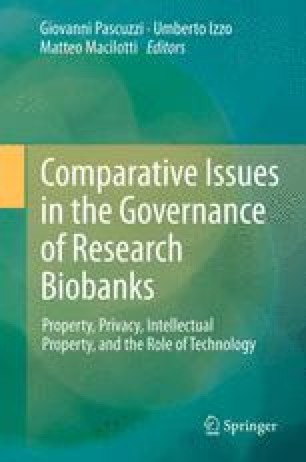 Health Insurance, Employment, and the Human Genome: Genetic Discrimination and Biobanks in the United States

Does genetic information warrant special legal protection, and if so how should it be protected? (See Feldman (2012), for a discussion of the implications of GINA for primary care providers). This question has taken on greater urgency in the United States as genetic testing has become more common and biobanks have developed repositories for large amounts of genetic information. One central concern raised by the collection and storage of genetic and biomedical information is that individuals will increasingly experience privacy violations and discrimination (Kaufman (2009), pp. 643–644). Biomedical researchers worry that public fear of discrimination and privacy violations will limit their ability to collect and analyze genetic information in biobanks. As genetic testing advances and biobanks grow, such concerns will be amplified. The possibility that fear of genetic discrimination would cause people to refrain from genetic testing, which would in turn inhibit scientific research and the discovery of potentially life-saving medical interventions, was in large part responsible for the passage of legislation that addresses the potential threat of genetic discrimination in the USA.

This essay examines the most recent (and indeed only) significant effort by the US government to prohibit genetic discrimination, the Genetic Information Nondiscrimination Act (GINA). Advocates worked for more than a decade to secure GINA’s passage. In the end, we argue that the legislation is unlikely to have the positive impact sought by advocates of genetic privacy. In part, GINA disappoints because it does too little. Hailed by its promoters as “the first civil rights act of the 21st century,” GINA’s reach is in fact quite modest and its grasp even more so. But GINA also fails by trying to do too much, tying the hands of insurers and employers in ways that may fail to serve the interests of individuals or society more generally. In short, if genetic discrimination is a problem that needs to be solved, GINA is not the solution. Instead, the Act creates a number of new and possibly intractable problems that may be more troublesome than what it originally set out to resolve.

Genetic Testing Genetic Information Sickle Cell Anemia Carpal Tunnel Syndrome Health Insurer
These keywords were added by machine and not by the authors. This process is experimental and the keywords may be updated as the learning algorithm improves.
This is a preview of subscription content, log in to check access.