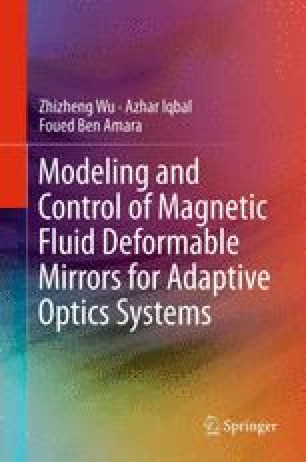 In this chapter, an analytical model of a magnetic fluid deformable mirror (MFDM) is presented. The model describes the dynamic response of the MFDM surface shape to the applied control magnetic field. The model is derived from the fundamental principles governing the deformation of the mirror surface under the influence of a magnetic field generated by an array of electromagnetic coils. The MFDM is modeled as a horizontal layer of a magnetic fluid. The free surface of the fluid layer serves as the deformable mirror. The dynamically varying shape of the mirror is described in terms of the deflection of the deformable surface as measured with respect to its flat state. The deflection at any surface location is obtained by analytically solving the equations governing the coupled fluid-magnetic system that constitutes the mirror. The model is presented for both the Cartesian and the cylindrical coordinate systems.

Magnetic Field Mode Shape Magnetic Fluid Surface Shape Fluid Layer
These keywords were added by machine and not by the authors. This process is experimental and the keywords may be updated as the learning algorithm improves.
This is a preview of subscription content, log in to check access.