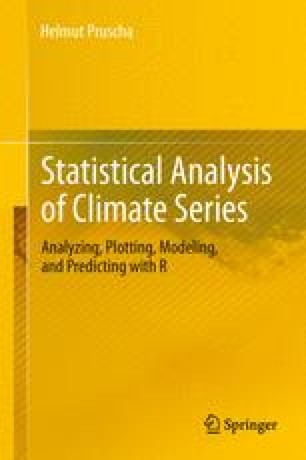 In the following we discuss statistical models, which are supposed (i) to describe the mechanism how a climate series evolves, and which can support (ii) the prediction of climate values in the next year(s). Time series models of the ARMA-type, as described in the Appendix B.3, will stand in the center of our analysis. These models are applied to the series of differences of consecutive time series values; this “differenced” series is considered as sufficiently “trendfree”.

Climatic Values Pure Random Series ARIMA Method GARCH Model Differenced Series
These keywords were added by machine and not by the authors. This process is experimental and the keywords may be updated as the learning algorithm improves.
This is a preview of subscription content, log in to check access.