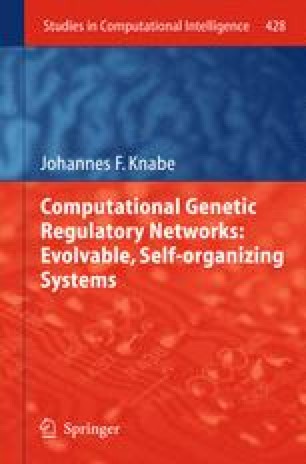 This research set out to investigate the evolvability of computational genetic regulatory networks (GRNs). As a basis, chapter 2 reviewed evolution in nature and genetic algorithms as computational abstraction of the natural process. The concept of evolvability was discussed in the light of natural and artificial evolution, with a particular focus on modularity and “duplication and divergence”. The introductory part was completed by a description of biological GRNs and a literature review of GRN models. Against this background, the xBioSys GRN model and evolutionary setup, used throughout this work, was introduced. It allows any number of genetic binding sites per gene, realised through variable genome length. These inputs can be combined in two regulatory levels, trying to capture synergistic effects of transcription factors (TFs). Additionally, xBioSys features “smooth matching” of TFs to genetic binding sites with variable affinities between the two, dynamically controlled by specificity factors.

Biological Clock Genetic Regulatory Network Morphogen Gradient Evolutionary Timescale Introductory Part
These keywords were added by machine and not by the authors. This process is experimental and the keywords may be updated as the learning algorithm improves.
This is a preview of subscription content, log in to check access.