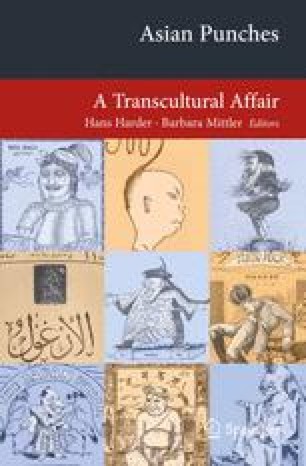 The Punch magazine is in itself quite a landmark in the history of newspaper and magazine publishing. In terms of the duration of its publication, it is certainly one of the top 100 newspapers and magazines worldwide. Apart from some interruptions during its last years, Punch was published over a period of more than 160 years (1841–2002). When limiting this list to satirical magazines, Punch easily qualifies as the longest-published journal to date. More importantly for the present context, the history of Punch is intrinsically connected with that of the British Empire; the Empire, in a way, provided for its distribution beyond Great Britain. In many parts of the world Punch was, and probably still is, the most popular ‘brand name’ for a satirical magazine—its conscious, skilful branding being a major key to Punch’s success, as Brian Maidment shows. It was first and foremost the combination of textual and graphic satire that was the characteristic trait of Punch, and the visual attraction of its cartoons made Punch’s name famous.

Colonial Setting British Empire Loan Scheme Mixed Drink South Asian Language
These keywords were added by machine and not by the authors. This process is experimental and the keywords may be updated as the learning algorithm improves.
This is a preview of subscription content, log in to check access.