Psycholinguistic and Sociolinguistic Perspectives on Second Language Learning and Teaching 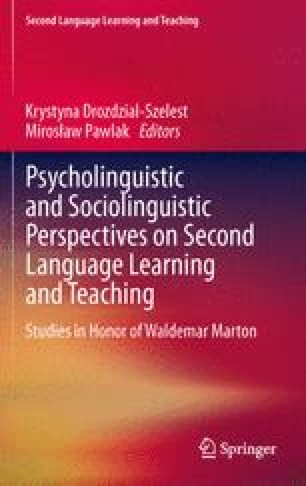 In the process of learning a second language and the acquisition of its grammar it is the amount of time devoted to the analysis of a particular problem and a potential number of occurring errors that seem to be crucial for the full understanding of the issue. For that reason, it is the impulsivity/reflectivity variable that deserves attention due to its superficial obviousness, which in fact turns out to be misleading. Conceptual tempo is the term used interchangeably with impulsivity/reflectivity (I/R) in order to define the variable of the cognitive style being responsible for decision-making while approaching a grammar task. Within this distinction, it is the notion of time and the number of incorrect responses before reaching the correct one on which the emphasis is placed. The aim of this chapter is to report on a study conducted to validate the claim that there exists a systematic relationship between the impulsive/reflective style and success in grammar acquisition. Presumably, due to the fact that I/R is a commonsense term, it tends to lead to intuitive assumptions as regards foreign language grammar processing. It is usually stated that reflective learners tend to be slower at approaching a task, but accurate, whereas impulsive learners need less time for an answer but tend to make more mistakes as a result of their rapid guesses. The time factor relates to the conceptual tempo, and thus this notion is of primary interest to this chapter.

Reading Comprehension Cognitive Style Average Response Time Reflective Learner Grammatical Form
These keywords were added by machine and not by the authors. This process is experimental and the keywords may be updated as the learning algorithm improves.
This is a preview of subscription content, log in to check access.

Cite this chapter as:
Michońska-Stadnik A. (2013) The Relationship Between Impulsive/Reflective Cognitive Style and Success in Grammar Acquisition in English as a Foreign Language. In: Drozdzial-Szelest K., Pawlak M. (eds) Psycholinguistic and Sociolinguistic Perspectives on Second Language Learning and Teaching. Second Language Learning and Teaching. Springer, Berlin, Heidelberg. https://doi.org/10.1007/978-3-642-23547-4_8