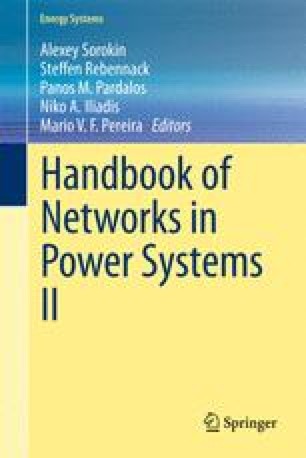 An LP Based Market Design for Natural Gas

Many electricity markets are now cleared using Linear Programming (LP) formulations that simultaneously determine an optimal dispatch and corresponding nodal prices, for each market dispatch interval. Although natural gas markets have traditionally operated in a very different fashion, the same basic concept can be applied. Since 1999, the Australian state of Victoria has operated a gas market based on an LP approximation to the underlying gas flow optimization problem. Here we discuss market design issues, using a formulation derived from the key gas flow equations. Dual variables on key constraints imply prices which vary by location, as for electricity markets, but also by time. But gas is both delayed and stored within the transportation system itself. This raises a number of operational, pricing, and hedging issues which could be ignored in the case of electricity, but become important when operating this kind of market for gas, or other commodities, such as water, in a supply network where there are delays and storage.

The authors wish to thank AEMO for information used in this chapter, Ray Whaley for assistance with the initial formulation, and Peter Jackson for his input.

Pepper et al. [26] shows discusses how to deal with several complications ignored in our simplified formulation via simple extensions of the approaches discussed in Sect. 5. Compressors play an important role in many gas systems. By compressing gas at one location they not only allow increased linepack storage, but increase pressure differentials, thus increasing gas flows from one location to another. Obviously, gas compression requires energy input, and in the Victorian system the compressors are themselves powered by gas drawn from the gas transport system. Although compressor fuel use is relatively low, it may be modeled as follows. A gas powered compressor is driven by a proportion of the gas that flows through it; increasing throughput in a pipe requires an increase in the compressor pressure to offset the dynamic losses down the pipe. Increasing \( \Delta p \) necessitates speeding up the compressor and hence increases fuel consumption. For centrifugal gas compressors a quadratic equation relates the change in head (pressure), Δp, volumetric flow at the compressor inlet \( q_c^i \), and impeller speed, RPM, as follows25:
$$ \Delta p = {{\hbox{C}}_1} \times {(q_c^i)^2} + {{\hbox{C}}_2} \times q_c^i \times RPM + {{\hbox{C}}_3} + {{\hbox{C}}_4} \times RP{M^2} $$
(34)
We can not use this equation directly in the formulation, though, because RPM is not an LP variable and the equation in this form is nonlinear. Still, we can reasonably assume that compressor operation rules will have been externally optimized and that optimal operation will imply equations giving the minimum gas consumption required to achieve any desired pressure/flow trade-off. Read and Whaley [32] present a number of detailed equations and steps to determine this loss in gas mass, during compressor operation. Basically, if we know the desired flow rate and pressure increase across the compressor, we can calculate the required running speed of the compressor, in RPM, from which we can determine the rate of fuel usage, and hence the actual mass “lost” in the compressor. This loss, which is a function of volumetric flow and pressure change, is the cost associated with pressurization of the gas in the downstream section of pipeline. So mass conservation must be revised to account for the fuel usage, Loss, represented as an effective reduction in mass flow on the discharge side of the compressor:26
$$ m_n^{{t + 1}} = m_n^t + q_n^{{ti}} - q_n^{{to}} + y_n^t - Loss_n^t(q_n^{{ti}},\Delta p_n^t) $$
(6c)

Ultimately, ignoring commitment of compressor units, this loss is the only specific aspect of compressor operation that needs to be included in the market clearing formulation. The compressor loss term in Eq. 6c) can be reasonably approximated by a convex differentiable function over a convex feasible operating region. Thus it can be linearized as a function of the LP variables, i.e.\( q_n^t \),\( p_n^t \),\( p_n^{{ti}} \) and \( p_n^{{to}} \). Apart from this, and the fact that pressure rises, rather than falling in the direction of flow, compressors can be treated like other “fittings”.

An implementable solution for a real pipe network must also generalize Eq. 6 to represent mass flow balance in situations where multiple inflow pipes of varying diameter and length connect to a similar variety of outflow pipes. Since the mass flow rate is equivalent on each side of “fittings”, such as valves, tees and bends, flow through them can be determined by the pressure difference between the two adjacent cells. But constraints and variables may be required to represent pressure drops of specific forms implied by particular fitting types. Some valves basically increase the friction factor in the Bernoulli equation, for a short pipe segment, with a closed valve implying infinite resistance. Pressure reducing valves are designed to reduce pressure to a specific level. This can be enforced by an upper pressure limit, but a slack variable is also required to represent the drop from the upstream pressure level to the specified level. Or a ratio constraint can be used to represent proportional pressure change as may occur when pipelines of different sizes are joined.

For proportional changes, injecting at a junction increases pressure in both adjacent cells, and produces the same kind of pricing patterns. A more detailed formulation, modeling both input and output pressures and assuming constant pressure ratios at boundaries, produces essentially the same pricing equations. In (30), though, the weights on the price terms (β and ψ), for cell n−1 now involve the cell boundary pressure ratio. Pressure reducing valves create a pressure discontinuity, though, and a pricing discontinuity can be expected. But, while a more complex formulation may make the pricing relationships more difficult for participants to understand and verify, LP optimization will always ensure that price relationships correctly reflect physical realities, to the extent that they are represented in the LP.