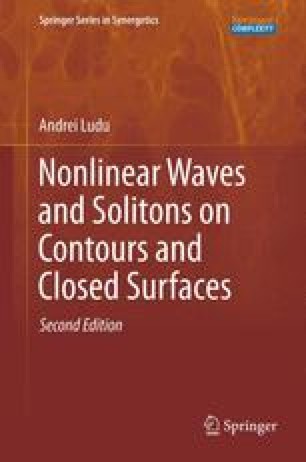 One of the most successful applications of the theory of nonlinear integrable systems on free one-dimensional systems is related to the existence of solitons on filaments. In the following we describe such systems from the hydrodynamic perspective and obtain the vortex filament equation, also called the binormal equation. Next, we describe a gas dynamical model which has an equivalent dynamics, and we obtain several soliton solutions and corresponding shapes. One interesting special feature of vortex filaments, namely by representing a unifying model for the Riccati and the NLS equations, is also presented. There are many applications of these nonlinear-geometric models, extending from nuclear physics to severe weather and astrophysics. In solid state physics filament solitons occur through the complex cubic Ginzburg-Landau equation (CCGLE) which resembles a magnetic Schrödinger equation, [197], similar to the cubic NLS equation. The nonlinear solutions of interest are strings and tubes with quantized angular momentum, namely vortex structures, their stability and their interactions [258, 51].

Solitary Wave Riccati Equation Soliton Solution Vortex Tube Vortex Filament
These keywords were added by machine and not by the authors. This process is experimental and the keywords may be updated as the learning algorithm improves.
This is a preview of subscription content, log in to check access.