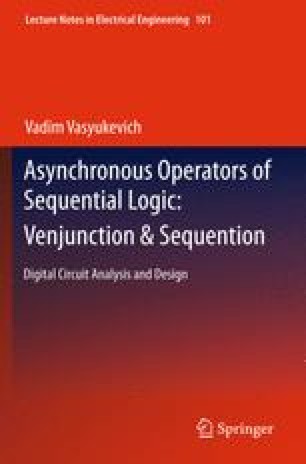 The first chapter is entirely dedicated to venjunction, which is represented as a logic-dynamical operation of asynchronous sequential logic. This operation is being thoroughly examined from all angles, such as: prerequisites of appearing, particularities of the implied time, necessary definitions, methods of analytical and graphical representations, enumeration of two-variable functions, and finishing by basic features of venjunctions in connection with operations of Boolean algebra. In the beginning of this section one will find clarifications of terminology to avoid incomprehension, and assure continuity between generally accepted notions and innovations. This to one or another degree refers to the following notions: format of a binary set, asynchronous sequence, logical switchings, moments and background of switchings, sequence of logical switchings, switching and venjunctive functions, venjunctive complete form, graph of venjunctive function, cyclic graph of switchings, and venjunctive representation of indeterminacy.

Binary Variable Binary Sequence Versus Versus Versus Versus Truth Table Boolean Variable
These keywords were added by machine and not by the authors. This process is experimental and the keywords may be updated as the learning algorithm improves.
This is a preview of subscription content, log in to check access.