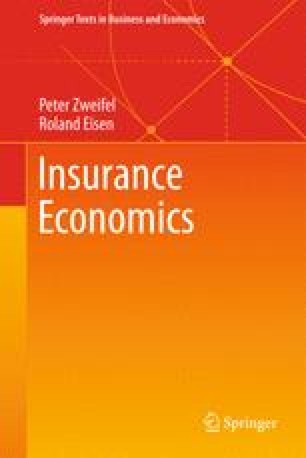 This chapter deals with social insurance (also called social security especially in the United States) and its interaction with private insurance (PI). After a short survey of the importance of social insurance (SI) in Sect. 9.1, the question of why there should be SI is raised in Sect. 9.2 (after all, there is no social banking!). In view of the fact that in the domain of personal insurance, SI has a volume of contributions that is several times as high as that of PI (see Table 9.1 below), this question may appear to be a moot point. Very often, market failure of PI is cited as a possible reason for the existence of SI. The problem is only that the rapid growth of SI would have to be explained with reference to market failures becoming more acute over time. This points to another explanation of SI, namely as a tool in the hands of political decision makers.

Gross Domestic Product Social Insurance Wage Rate Private Insurance Moral Hazard
These keywords were added by machine and not by the authors. This process is experimental and the keywords may be updated as the learning algorithm improves.
This is a preview of subscription content, log in to check access.