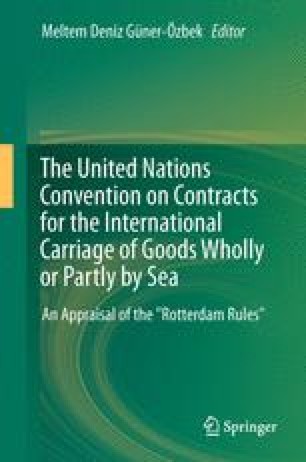 Rights of the Controlling Party

The exercise of the right of control may be linked to the possession of a transport document, but not necessarily so. As a matter of principle, the right of control is a self sustained right and, therefore, may serve as the legal basis for documentless maritime carriage. As such, it will constitute an essential element of the legal infrastructure for future e-commerce systems in overseas trade and transport.

Supra Note Legal Basis Legal Certainty Security Interest Legal Infrastructure
These keywords were added by machine and not by the authors. This process is experimental and the keywords may be updated as the learning algorithm improves.

This paper represents an updated and revised version of a paper delivered on 28th March 2008 at the international symposium “Transportation Law for the 21st Century: the New UNCITRAL Convention” held at The University of Texas School of Law in Austin, USA. Some of the material in this paper has been published in Texas International Law Journal 44-3 and in The Journal of International Maritime Law 14 (2008). Most of the material is also included in Chapter IX of: The Rotterdam Rules: The U.N. Convention on Contracts for the International Carriage of Goods Wholly or Partly by Sea, Sturley et al. (2010) Sweet & Maxwell, London.