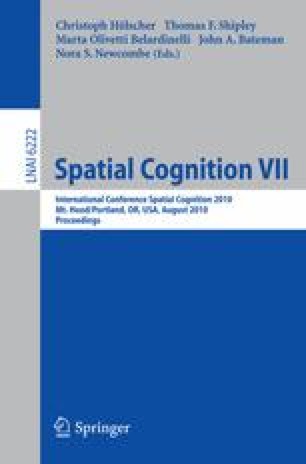 Individual Differences in Spatial Language and Way-Finding: The Role of Cognition, Emotion and Motivation

People can experience an environment in different ways and from different points of view: by moving around in it, inspecting it from above (flying, viewing from a mountain top or high building), studying a map, or listening to a verbal description. How an environment is experienced can influence its spatial representation and, as a consequence, spatial performance. However, this latter can also be influenced by a series of factors inherent to individuals: gender, spatial and working memory abilities, cognitive styles in spatial representation, motivation and attitude toward spatial tasks, emotion and personality. Here I present an overview of a series of research programs underway in the Laboratory of Learning and Memory at the University of Paduas Department of General Psychology. Our research on spatial cognition has focused on two main topics: (i) memory and comprehension of spatial language, (ii) navigation and way-finding behavior. In both cases, particular emphasis has been given to the study of individual differences. Spatial text comprehension and navigation vary widely among individuals. We investigated potential sources of individual differences and examined the roles of spatial ability, working memory, cognitive style in spatial representation, as well as those of other non-cognitive variables: motivation, personality and emotion. To measure individual differences in sense of direction (SOD), cognitive styles in spatial representation, motivation in performing spatial tasks, and spatial anxiety, we constructed a number of self-rate scales, which are illustrated in terms of performance on various spatial tasks.