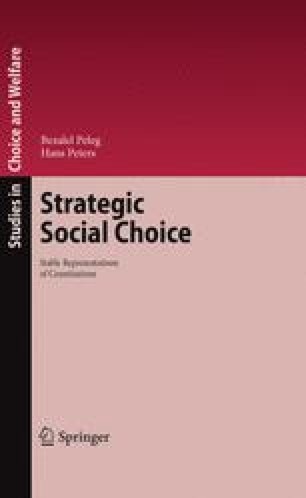 Consistent voting systems with a continuum of voters

In this chapter we extend the model of Chapters 9 and 10 to a classical voting system with still finitely many alternatives (candidates) but with very many voters. Such a system is representative of political elections on the local or national level. As an, in our view, best approximation we model voters as elements of a non-atomic measure space. In particular, this approach allows us to accommodate the fact that in such voting systems single voters have negligible influence on the final outcome, and to avoid potential combinatorial complexities of a model with a large but finite number of voters.

Induction Hypothesis Vote System Social Choice Function Strong Equilibrium Single Voter
These keywords were added by machine and not by the authors. This process is experimental and the keywords may be updated as the learning algorithm improves.
This is a preview of subscription content, log in to check access.