The Carpathians: Integrating Nature and Society Towards Sustainability 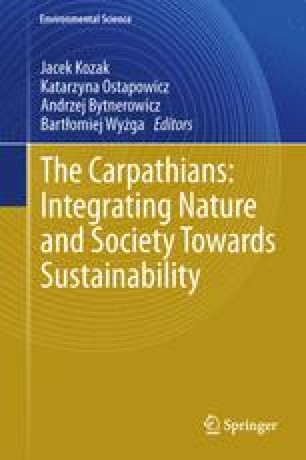 The Carpathians: Integrating Nature and Society Towards Sustainability pp 111-130 | Cite as

Annual and monthly air temperatures at meteorological stations covering nearly the whole vertical range (696–2,636 m a.s.l.) of the High Tatra Mountains (Western Carpathians) were analyzed for the period 1961–2007. The long-term variability in the air temperature at different altitudes was evaluated using two independent data sources. Upper-air temperature measurements from an aerological station near to the examined ground stations were interpolated to correspond to the altitudes of the stations. In spite of systematic differences between ground and upper-air temperatures, a comparison between homogenized time series showed a high correlation and identical periods of increase or decrease in both data sets, with the same periodicities, identical coolest and hottest years, and similar shifts in annual and monthly temperature distributions. An increase in selected isotherm altitudes in the period 1991–2007 was found when compared to the climatic normal period 1961–1990. A statistically significant linear increase in annual temperature (0.21–0.30 °C/decade) was detected in both data sets. The most rapid increase in temperature was found for July, August, December and January. A less significant increase was detected for spring and no change or even negligible decrease in temperature was found for autumn. The altitudes of selected isotherms were calculated with two methods: (1) linear fitting and (2) cubic spline interpolation of the vertical temperature profile. Particular combinations of data sources (aerological and ground) and calculation methods (linear fit and cubic spline) gave slightly different altitudes for the selected isotherms. The method used to calculate the isotherm altitudes should be taken into consideration when comparing results from previous studies. Linear increase in the altitude of selected isotherms of annual temperature, calculated for aerological and ground data, showed rates of 3.9–5.2 and 2.5–4.9 m/year, respectively. A significant linear increase in the position of selected monthly isotherms was found only for July and August. An increase in isotherm altitudes indicates a shift in the vertical climatic stratification.

Temperature Time Series Ground Measurement Monthly Time Series Spline Interpolation Method Tested Time Series
These keywords were added by machine and not by the authors. This process is experimental and the keywords may be updated as the learning algorithm improves.
This is a preview of subscription content, log in to check access.