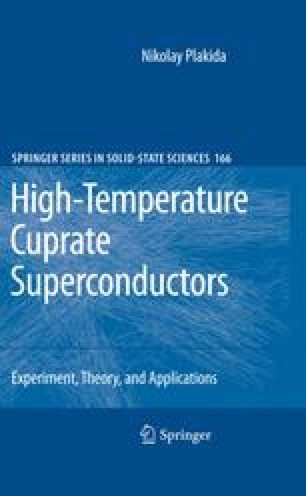 A generic feature of the copper–oxide compounds is the occurrence of strong antiferromagnetic (AF) copper spin correlations in the CuO2 planes. In the undoped compounds, the in-plane copper ions are in the state Cu2+ (3d 9) with one hole of spin S = 1/2 in the 3d shell. A strong superexchange interaction (via oxygen ions) of the order of 1,500 K between the copper spins gives rise to a three-dimensional (3D) AF long-range order in La2CuO4 and YBa2Cu3O6 compounds with high Néel temperatures T N = 300–500 K (see the reviews by Birgeneau et al. [137], Rossat-Mignod et al. [1069], Johnston [560], Kastner et al. [590], Furrer [372], Bourges et al. [170], Tranquada [1264]). Although the long-range order disappears in the metallic and superconducting phases, strong short-range dynamical spin correlations are observed even at temperatures above 100 K. While the normal state spin fluctuation spectra of YBCO, Tl– and Bi–copper–oxide compounds are rather broad, their superconducting phases are characterized by the presence of strong resonance peaks at energies close to 40 meV, at the AF wavevector. This fact resulted in a number of hypotheses on the possible electron pairing in copper–oxide compounds via magnetic degrees of freedom (Sect. 7.3.2). The two-dimensional (2D) character of the copper spin–1/2 interactions in the copper–oxygen planes results in strong quantum fluctuations. In this respect, besides exploring the interplay of antiferromagnetism and superconductivity, the study of the quantum 2D antiferromagnet is of great interest in its own right (see [783]).

Nuclear Quadrupole Resonance Knight Shift Cuprate Superconductor Spin Susceptibility Spin Excitation
These keywords were added by machine and not by the authors. This process is experimental and the keywords may be updated as the learning algorithm improves.
This is a preview of subscription content, log in to check access.