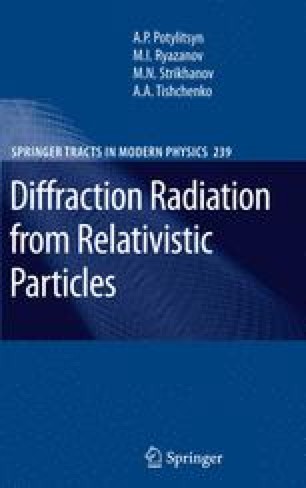 Diffraction Radiation at the Resonant Frequency

Diffraction radiation is microscopically a result of the scattering of the self field of a uniformly moving charge from the atoms of a medium. The cross section for the scattering of an electromagnetic wave from an atom is maximal near resonance, so that the diffraction radiation intensity should increase at resonant frequencies. As known, the transverse field of a source at small distances is much lower than the longitudinal field. Therefore, the energy transfer from an exited atom to an unexcited atom in dense media occurs primarily through the transverse field by the dipole—dipole interaction rather than through the emission and absorption of resonant transverse waves. As a result, the interaction of a resonant photon with an atom most likely leads to disappearance of the photon and appearance of an electron excitation further migrating in the medium as an exciton. For this reason, the resonant photon, i.e., the photon whose energy is close to the exciton energy does not penetrate inside the medium. For the same reason, the emission of resonant transverse waves by an atom from the depth of a dense medium is impossible. Thus, the probability of the formation of diffraction radiation at the resonant frequency in the process of scattering from an atom in a dense medium is much lower than the probability of the formation of an exciton. Therefore, diffraction radiation is generated due to the scattering of the self field of the particle from the atoms of the surface layer. The thickness of this layer is determined by the absorption coefficient of transverse resonant waves. Since this layer is thin, we can use the approximation of the single scattering of the resonant component of the self field of the fast particle from the atoms of the medium. This approximation in the problem of the reflection of resonant electromagnetic waves from the surface of a medium was proposed by Fermi [1]. This makes it possible to solve the reflection problem without the usual macroscopic boundary conditions and provides a good agreement with experimental data.

Resonant Frequency Transverse Field Fast Particle Absorption Length Resonant Wave
These keywords were added by machine and not by the authors. This process is experimental and the keywords may be updated as the learning algorithm improves.
This is a preview of subscription content, log in to check access.