The Fish Production Potential of the Baltic Sea 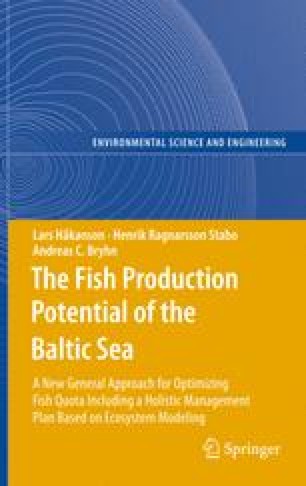 During the last decades there has been a steadily increasing flow of reports on declining and even collapsed fisheries in many parts of the world (e.g., Myers and Worm, 2005), from the well known cod disaster along the Canadian Atlantic coast, the well documented fishery problems in the Black Sea (Zaitsev and Mamaev, 1997) to the overfishing in the Baltic Sea and the Kattegat/Skagerrak (see, e.g., FAO, 2003; IBSFC, 2003). These problems have also been discussed intensively in the media, at environmental authorities at local, regional and national levels, and certainly not least among the general public. An excellent book on these matters has been published in Swedish by Isabella Lövdin (2007; Tyst hav; Silent Sea). Another example of the interest in this problem is that 50 million euro have been donated by an industrialist (Björn Carlsson; see http://www.balticsea2020.com/) and a trust has been established to use this money to try to “save” the Baltic Sea. It is evident that the general public, most politicians, many environmental managers and scientists are convinced that many parts of the Baltic Sea are in a deplorable state, with increasing extension of “dead bottom areas” (Jonsson, 1992), major regime shifts (Swedish Environmental Advisory Council, 2005; Wulff, 2006), increasing blooms of toxic algae (see the HELCOM website) and increasing anthropogenic eutrophication and that these problems add to the problems with the intensive fishing. Our results in this book are meant to give an honest quantitative picture of the situation in the Baltic Sea related to the fish production potential. This should help to produce a more solid scientific base for discussions on how to set fish quota and adjust those to changes in salinity, temperature, nutrient loading and especially related to different remedial actions and strategies and what to expect from various actions.

Suspended Particulate Matter Predatory Fish Fish Production Prey Fish Fish Yield
These keywords were added by machine and not by the authors. This process is experimental and the keywords may be updated as the learning algorithm improves.
This is a preview of subscription content, log in to check access.