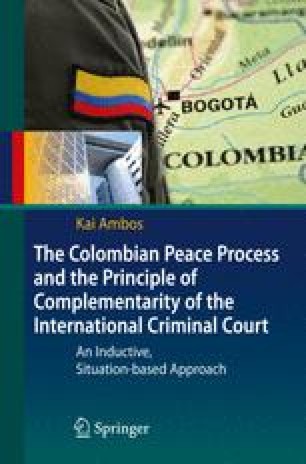 The Process Under Law 975

Following the Colombian Supreme Court one may distinguish between an administrative and a judicial phase under Law 975. The latter can be divided, in line with traditional Colombian doctrine, in a “pre-procedural” phase, directed by the General Prosecutor’s Office (Fiscalía General de la Nación), and a “procedural” one, directed by the special Justice and Peace Chambers of the Higher Tribunals (Salas de Justicia y Paz de los Tribunales Superiores de Distrito Judicial). The whole procedure has been summarized in a schematic way in Part III, document 4.

Criminal Procedure Transitional Justice Khmer Rouge Free Version False Confession
These keywords were added by machine and not by the authors. This process is experimental and the keywords may be updated as the learning algorithm improves.
This is a preview of subscription content, log in to check access.

Cite this chapter as:
Ambos K. (2010) The Process Under Law 975. In: The Colombian Peace Process and the Principle of Complementarity of the International Criminal Court. Springer, Berlin, Heidelberg