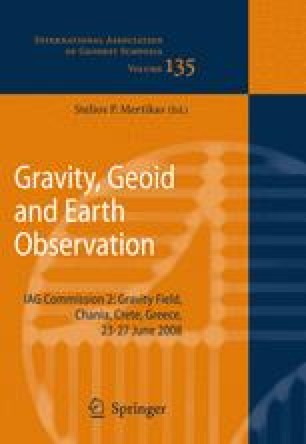 The Federal Institute of Geosciences and Natural Resources (BGR) is carrying out gravity surveys onboard marine research vessels since the 1960s. Since 1984 these measurements are performed with the KSS31 gravity meter system. This system has been modified and complemented during the last years to use it for aerogravity surveys as well.

In May 2007 the first aerogravity campaign was carried out with the complete system. Gravity data of the main part of the German exclusive economic zone in the North Sea were obtained. During 17 flights 32 northwest-southeast running profiles with a spacing of 5 km and 11 tie profiles with a spacing of 20 and 30 km respectively were surveyed. The total profile length added up to 10,500 km. The standard survey altitude was 1,000 ft. above sea level. Depending on the wind speed and direction the survey ground velocity ranged between 170 and 230 km/h.

In order to get the free air gravity anomalies several reductions to the measured gravity data have to be applied. For this purpose the flight trajectories were determined with high accuracy. Kinematic GPS data of 3 antennae were recorded and combined with the data of an inertial navigation system. One GPS base station was operated at the airfield. Additional base station data were obtained as necessary from the Land Survey Offices of Schleswig-Holstein and Niedersachsen.

The measured free-air gravity anomalies have an accuracy of about 4 mgal with a spatial resolution of 5 km half-wavelength. Comparative marine gravity measurements were carried out with the same gravity meter system during a BGR cruise with R/V FRANKLIN in June/July 2007. The agreement is satisfactory. The combined data sets result in a free-air gravity anomaly map of the German EEZ in the North Sea.