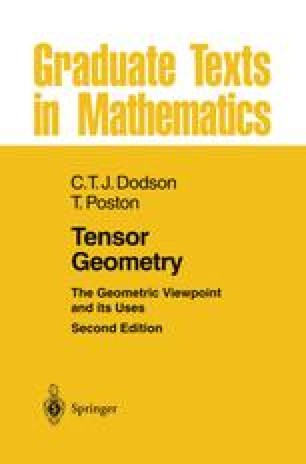 Starting with a vector space X, we already have several spaces derived from it, such as the dual space X* and the spaces L 2(X;R) and L 2(X*;R) of bilinear forms on X and X*. We shall now produce some more. Fortunately, rather than adding more spaces to an ad hoc list, all as different as, say X* and L 2(X; R) seem from each other, our new construction gives a general framework in which all the spaces so far considered occur as special cases. (This gathering of apparently very different things into one grand structure where they appear as examples is common in mathematics — both because it is often a very powerful tool and because many mathematicians have great difficulty in remembering facts they can’t deduce from a framework, like the atomic weight of copper or the date of the battle of Pondicherry. This deficiency is often what pushed them to the subject and away from chemistry or history in the first place, at school.)

Vector Space Tensor Product Bilinear Form Linear Functional Summation Convention
These keywords were added by machine and not by the authors. This process is experimental and the keywords may be updated as the learning algorithm improves.

“In that One Void the two are not distinguished: each contains complete within itself the ten thousand forms.”