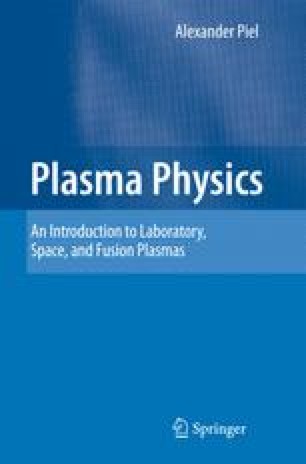 The stability of a plasma system can be analyzed by different methods. For a simple mechanical system, such as the pendulum consisting of a massless rod and a bob shown in Fig. 8.1a, stability is defined by the property that a deflection from the equilibrium position (shown in grey) leads to a restoring force F rest, which drives the pendulum back to its original position. The interplay of a restoring force, which is proportional to the deflection, and the inertia of the pendulum bob leads to harmonic oscillations.

Dielectric Function Plasma Column Virtual Cathode Plasma Mode Electron Plasma Frequency
These keywords were added by machine and not by the authors. This process is experimental and the keywords may be updated as the learning algorithm improves.

“And if you take one from three hundred and sixty-five, what remains?”

Humpty-Dumpty looked doubtful. “I’d rather see that worked out on paper.”

Lewis Carroll, Through the Looking-Glass