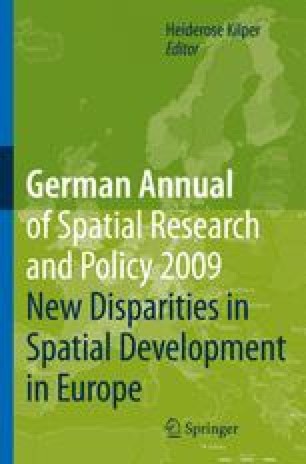 Germany in the Light of the Territorial Agenda – The ESPON Perspective

The European Union’s Territorial Agenda, agreed upon in May 2007, aims at a more competitive and sustainable Europe that consists of diverse regions. Strengthening territorial cohesion is considered as a main goal to be fulfilled in view of major territorial challenges. These are, among other things, regionally diverse impacts of climate change, impacts of EU enlargement, and the territorial effects of demographic change. Germany, as a vital part of Europe, is also facing these challenges. The Territorial Agenda encourages the strengthening of regional identities and an improved use of the territorial diversity of European regions. The respective recommendations are concretised in six priorities for territorial development in the EU.

Transport Infrastructure German Region Territorial Development Territorial Cohesion Territorial Diversity
These keywords were added by machine and not by the authors. This process is experimental and the keywords may be updated as the learning algorithm improves.

This article is based on the general departmental research project Germany in Europe financed by the BBR under supervision of the European Spatial and Urban Development unit. The project was conducted in a consortium consisting of Raumkom, Spatial Forsight, and Spiekermann & Wegener under the lead partnership of the Institute for Regional Development and Structural Planning (IRS). The summarised conclusions provided in this contribution are described in more detail in the German publication Deutschland in Europa (Reihe Forschungen, No. 135, BBR) as well as in a brochure entitled Germany in Europe (special publication, BBR).