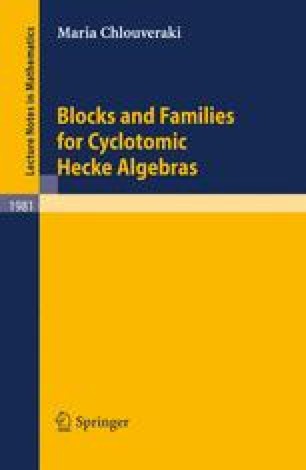 The second chapter focuses on the study of blocks of algebras of finite type and in particular, of symmetric algebras. In the first section, we introduce the notion of blocks and show how we can reduce, in many different ways, the problem of the determination of the blocks of an algebra to easier cases (mostly by changing the ring of definition). In the second section, we give the definition of a symmetric algebra and introduce the Schur elements associated to its irreducible characters. We explain why the Schur elements play an essential role in the determination of the blocks of a symmetric algebra. Now, if we know the blocks of a symmetric algebra, then, given that certain conditions are satisfied, we can obtain the Schur elements and the blocks of its subalgebras with the use of a generalization of some classical results, known as “Clifford theory”, to the case of “twisted symmetric algebras of finite groups”. This is the object of Section 2.3. Finally, in the last section, we present some more results on the block theory of symmetric algebras, which are related to the representation theory of these algebras. We define decomposition maps and generalize results of Brauer theory to the case of symmetric algebras defined over discrete valuation rings. Moreover, in Subsection 2.4.4, we give a new criterion for a symmetric algebra to be split semisimple. Throughout this chapter, we use the simple example of group algebras in order to illustrate some of the notions. However, when we introduce Hecke algebras in Chapter 4, we will see that they are symmetric too. In particular, the Appendix contains numerous applications of Clifford theory to Hecke algebras. If the reader is in need of more examples than the ones given in Chapter 2, they should feel free to refer to Chapter 4 or the Appendix.

Prime Ideal Irreducible Character Valuation Ring Symmetrize Form Trace Function
These keywords were added by machine and not by the authors. This process is experimental and the keywords may be updated as the learning algorithm improves.
This is a preview of subscription content, log in to check access.