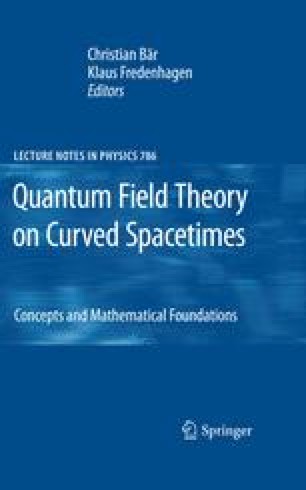 Microlocal Analysis deals with the singular behavior of distributions in phase space. Distributions appear in physics in various forms: as mass distributions of point particles, as Green’s functions, and as propagators in quantum field theory. The theory of distributions not only has applications such as these in physics; but is also widely and intensively used in mathematics, in particular in the theory of partial differential equations. For example, fundamental solutions to partial differential equations are usually singular distributions and the behavior of the singularities of these distributions encodes the behavior of the solutions. Microlocal analysis deals with the detailed analysis of such distributions. It turns out that the singularities of distributions can be localized in phase space. This leads to the notion of wavefront sets, a refinement of the notion of singular support. Physicists may find this natural: the singularities of solutions to partial differential equations are described by geometrical optics, and geometrical optics is equivalent to a classical system on classical phase space. In fact, some ideas used in microlocal analysis were developed in less rigorous form by physicists. Asymptotic expansions, the WKB approximation, transport equations, all well familiar to physicists, appear also in microlocal analysis, sometimes a little bit disguised.

Fundamental Solution Geometrical Optic Principal Symbol Lorentzian Manifold Cauchy Surface
These keywords were added by machine and not by the authors. This process is experimental and the keywords may be updated as the learning algorithm improves.
This is a preview of subscription content, log in to check access.