Hydrodynamic Limits of the Boltzmann Equation 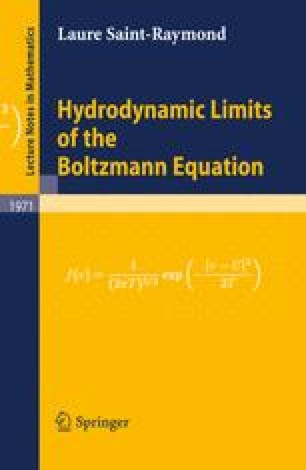 Hydrodynamic Limits of the Boltzmann Equation pp 1-34 | Cite as

The Boltzmann equation and its formal hydrodynamic limits

The kinetic theory, introduced by Boltzmann at the end of the nineteenth century, provides a description of gases at an intermediate level between the hydrodynamic description which does not allow to take into account phenomena far from thermodynamic equilibrium, and the atomistic description which is often too complex. For a detailed presentation of the various models and their derivation from the fundamental laws of physics, we refer to the book of Cercignani, Illner and Pulvirenti [31] or to the survey on the Boltzmann equation by Villani [106]. Here we will just recall some basic facts which are useful for the understanding of the problem of hydrodynamic limits.

Kinetic theory aims at describing a gas (or a plasma), that is a system constituted of a large number N of electrically neutral (or charged) particles from a microscopic point of view. The state of the gas is therefore modelled by a distribution function in the particle phase space, which includes both macroscopic variables, i.e. the position x in physical space, and microscopic variables, for instance the velocity v. In the case of a monatomic gas,
$$f \equiv f(t,x,v),{\rm }t > 0,x \in \Omega ,v \in R^3 .$$
meaning that, for all in_nitesimal volume dxdv around the point (x; v) of the phase space, f(t; x; v)dxdv represents the number of particles, which at time t, have position x and velocity v.

Boltzmann Equation Global Existence Strouhal Number Local Thermodynamic Equilibrium Collision Operator
These keywords were added by machine and not by the authors. This process is experimental and the keywords may be updated as the learning algorithm improves.
This is a preview of subscription content, log in to check access.