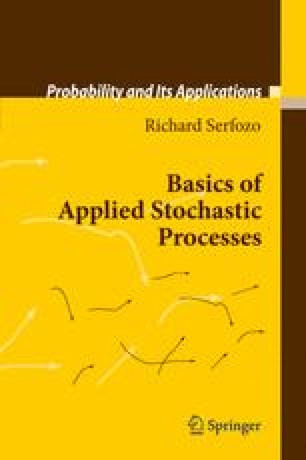 Chapter
Part of the Probability and Its Applications book series (PIA)

Brownian motion processes originated with the study by the botanist Brown in 1827 of the movements of particles suspended in water. As a particle is occasionally hit by the surrounding water molecules, it moves continuously in three dimensions. Assuming the infinitesimal displacements of the particle are independent and identically distributed, the central limit theorem would imply that the size of a typical displacement (being the sum of many small ones) is normally distributed. Then the continuous trajectory of the particle in \( \mathbb{R}^3 \) would have increments that are stationary, independent and normally distributed. These are the defining properties of Brownian motion. This diffusion phenomenon, commonly encountered in other contexts as well, gave rise to the theory of Brownian motion and more general diffusion processes.

Brownian Motion Gaussian Process Sample Path Moment Generate Function Iterate Logarithm
These keywords were added by machine and not by the authors. This process is experimental and the keywords may be updated as the learning algorithm improves.
This is a preview of subscription content, log in to check access.