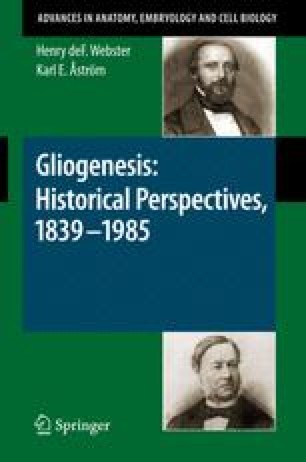 The cells described by Schwann have a long and interesting history (Causey 1960; Jacobson 1978; Schwann 1847) and a substantial amount was known about how they acquired their differentiated properties during development. In the 1920s, Harrison (1924) had shown that the neural crest provided most of the Schwann cells for developing nerve fibers. Although this conclusion was disputed, it was reexamined when autoradiographic techniques made it possible to label neural crest cells, transplant them, and follow their subsequent differentiation. Both Johnston (1966) and Noden (1975) showed that virtually all satellite cells that surrounded neurons, their processes, and terminals in the cranial portion of the PNS were derived from the neural crest. It was clear that neural crest cells also participated in the formation of bone, cartilage, connective tissue, and skeletal muscle. Finally, these experiments also documented the great migratory capacity of neural crest cells, a characteristic exemplified by the occasional presence of spinal ganglion neurons in the sciatic nerve (Metz et al. 1958). Since Schwann cells began migrating early and proliferated extensively before differentiating, their origin was reexamined with a new biologic marker that is not diluted during cell division (LeDouarin 1973). Cells in the chick and Japanese quail are compatible and could be distinguished by differences in chromatin pattern that continued to replicate. This technique provided additional, convincing evidence for the neural crest origin of Schwann cells and has also been useful in identifying other neural crest derivatives (Johnston et al. 1974; LeDouarin et al. 1981). Later observations showed that development of dorsal root and sympathetic ganglia (including their Schwann cells) depended on the survival and differentiation of somite-derived structures (Teillet and LeDouarin 1983). Teillet and LeDouarin showed that excision of the neural tube and notochord produced rapid death of somitic cells. Dorsal root and sympathetic ganglia failed to develop; development of cephalic and enteric ganglia was unaffected. The neural tube permitted normal development of dorsal root and sympathetic ganglia after notochord removal, but if the neural tube was removed and the notochord was left intact, only the sympathetic ganglia developed normally. These interesting results showed that cephalic, enteric, and peripheral (dorsal root and sympathetic) ganglia have different requirements for development and that the latter ganglia are differentially sensitive to the presence of the neural tube and notochord (Teillet and LeDouarin 1983).

Sciatic Nerve Schwann Cell Myelin Sheath Neural Crest Cell Distal Stump
These keywords were added by machine and not by the authors. This process is experimental and the keywords may be updated as the learning algorithm improves.
This is a preview of subscription content, log in to check access.