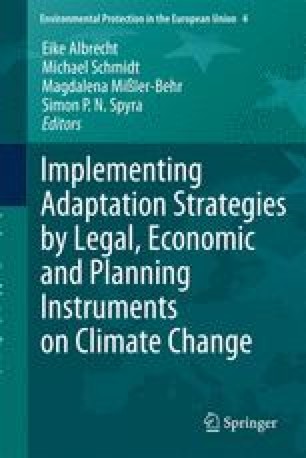 The observations of the climate and the Earth atmosphere during the past 200 years have showed that in the recent years the temperature tends to increase on the global scale. Such an increase is posing a problem in many regions, due to its observable consequences visible as droughts, erosion, scarcity of water for the drinking purposes, etc. Scientists and decision makers are making currently efforts to stop, minimize or at least delay these negative effects. Several policies and strategies are being developed to combat the climate change. The question, however, arises with respect to the efficiency and feasibility of such actions. There is no way to assure the success of all those actions; however, several tools are already being available for the assessment and modelling of the future results being the consequence of the present actions and decisions being currently made. One such a tool is a Life Cycle Assessment (LCA). LCA allows decision makers to assess the environmental impact of the product, service or activity before such a product or service is even offered on the market. Simultaneously, the product’s future environmental impacts may be analysed using various scenarios and assumptions. Thus, the potentials dangers may be highlighted and avoided before they occur in the reality. This chapter will analyse and compare the traditional use of this technique and confront single-product LCA with the studies influencing the decision making concerning the climate change on the national and international level. In the first sections of the chapter, the overview of the most important facts about the methodology, tools, and the recent developments of the LCA technique will be given. This will include the ISO standards as well as national and international laws, basing on the LCA principles, such as Energy-using Products Directive and the Renewable Energy Sources Act (EEG) in Germany. Since the LCA principles are incorporated also in the nonbinding standards and agreements, the most important of them will be presented as well.

However, the relatively straightforward modelling of the industrial products, were the material and waste streams are well recognized, complicates when coming to the energy generation from the biomass. The main problems that LCA practitioner encounters in the practice as well as modelling approaches will be presented and discussed in the second section of the chapter. This will include the allocation methodologies for the simultaneous production of the electricity and thermal energy, and/or the question of indirect influence of the products on the environment, being outside the product system analyzed. Such indirect impacts (as i.e. indirect land-use change) may totally change the picture of the bioenergy production in the future, additionally punishing several technologies for the damages made in the developing countries, but simultaneously creating additional advantages for the other bioenergy pathways.

The next section of the chapter will present specific examples of the LCA projects, which show the differences between the LCA approaches on the single-product level as well as the national and international programme level. In the first case, the LCA study will be presented, which has been done for the Siemens Power Generation and compares the LCA results of the two gas turbines. Thus, the product impact on the climate and the GHG emissions may be analysed. In the second case, a study will be discussed which aimed at pointing out the most environmentally friendly (and thus, being worth of the further financial and tax support) biomass conversion pathways for the production of the bioenergy/biofuel from the renewable resources. This includes resources such as straw, manure, wood, etc. converted with the available and promising technologies.

Another possibility of using the LCA technique on the international level will be shown on the example of the Clean Development Mechanism (CDM). In this case, the LCA may be used effectively as the support tool for the evaluation of the CDM actions, resulting in the reduction of the greenhouse-gas emissions in the developing countries at the lower cost that the same reduction would cause in the developed countries. The possibilities and advantages, but also potential shortcomings of the LCA technique applied in the framework of the CDM methodology will be discussed.