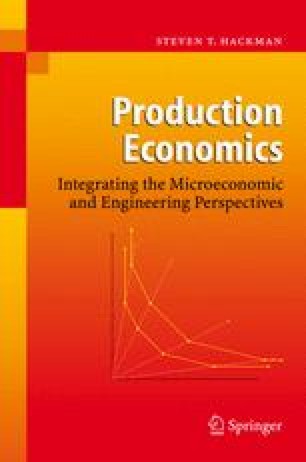 As we have seen in earlier chapters, convexity is essential to the microeconomic theory of production. From a modeling perspective, convexity ensures that a particular kind of mixing of feasible actions is still feasible, which is often a reasonable assumption. Generally, convexity (in some form) is assumed to exploit its convenient (e.g. separation) properties. There have been efforts to generalize the concept of convexity, i.e., convex sets and quasiconcave/quasiconvex functions. These efforts can be categorized into two approaches. The first approach allows a separation of a point to the set by something other than a hyperplane. The second approach allows two points in the set to be connected by a more general path than a line segment or, from a modeling perspective, to allow a more general kind of mixing of feasible actions.

Data Envelopment Analysis Production Function Optimal Allocation Projection Property Reverse Inclusion
These keywords were added by machine and not by the authors. This process is experimental and the keywords may be updated as the learning algorithm improves.
This is a preview of subscription content, log in to check access.