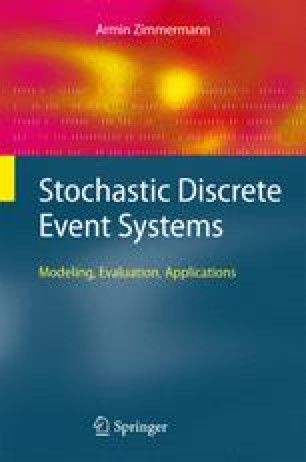 This chapter covers the use of classic stochastic Petri nets for the modeling and evaluation of stochastic discrete event systems. They represent a graphical and mathematical method for their convenient specification. Petri nets are especially useful for systems with concurrent, synchronized, and conflicting or nondeterministic activities. The graphical representation of Petri nets comprises only a few basic elements. They are, therefore, useful for documentation and a figurativeaidforcommunicationbetweensystemdesigners.Complexsystemscan be described in amodular way, where only local states and state changes need to be considered.Themathematical foundation of Petri nets allowstheirqualitative analysis based on state equations or reachability graph, and their quantitative evaluation based on the reachability graph or by simulation.

Petri nets come in many different flavors. Common to all of them is that they contain places (depicted by circles), transitions (depicted by boxes or bars), and directed arcs connecting them. A Petri net can thus be mathematically classified as a directed, bipartite graph. Places may hold tokens, and a certain assignment of tokens to the places of a model corresponds to its model state (called marking in Petri net terms). Transitions model activities (state changes, events). Just like in other discrete event system descriptions, events may be possible in a state – the transition is said to be enabled in the marking. If so, they may happen atomically (the transition fires) and change the system state. Transition enabling and firing as well as the consequential marking change are defined by the enabling rule and firing rule of the actual Petri net class. In our understanding of SDES, activities may take some time, thus allowing the description and evaluation of performance‐related issues. Basic quantitative measures like the throughput, loss probabilities, utilization, and others can be computed. In the Petri net environment, a firing delay is associated to each transition, which may be stochastic (a random variable) and thus described by a probability distribution. It is interpreted as the time that needs to pass between the enabling and subsequent firing of a transition.

Work Plan Automate Guide Vehicle Discrete Event System Reachability Graph Input Place
These keywords were added by machine and not by the authors. This process is experimental and the keywords may be updated as the learning algorithm improves.
This is a preview of subscription content, log in to check access.