Optical Nonlinearities in Chalcogenide Glasses and their Applications 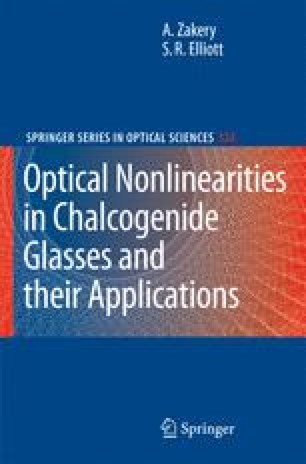 Different techniques, such as two-photon absorption spectroscopy [131], degenerate four-wave mixing (DFWM), Z-scan [132, 133], third-harmonic generation (THG), optical Kerr-shutter (OKS) [134], and self-phase modulation (SPM), have been used to measure the nonlinear refractive index, as well as the nonlinear absorption coeffcient, of chalcogenide glasses. The nonlinear refractive index n2 of As2S3 glass fiber was first measured directly by a spectrum-broadening experiment at a wavelength of 1.3 μm [135]. The n2 value was also measured by a Kerr-shutter (Fig. 4.1) experiment at 1.3 μm [136]. In the optical Kerr effect, the nonlinear phase shift induced by an intense, high-power, pump beam is used to change the transmission of a weak signal through a nonlinear medium. The operating principle of a Kerrshutter can be explained in the following way. The pump and signal beams are linearly polarized at the fiber input with a 45° angle between their directions of polarization. A gate pulse induces a phase-shift difference between two signal components whose polarization is parallel and perpendicular to that of the gate. When the phase-shift difference reaches π, the polarization of the signal is switched by 90°. The n2 values obtained were 1.7 × 10−14 cm2W−1 and 4 × 10−14 cm2W−1, respectively. The difference may be due to an increase in the transmission loss caused by a higher average power in the spectrumbroadening experiment.

Nonlinear Absorption Chalcogenide Glass Nonlinear Refractive Index Phase Conjugation Nonlinear Refraction
These keywords were added by machine and not by the authors. This process is experimental and the keywords may be updated as the learning algorithm improves.
This is a preview of subscription content, log in to check access.