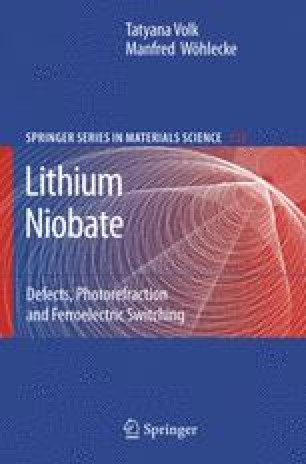 Problem of a Non-Erasable Photorefractive Hologram

The chapter characterizes the methods providing a non-erasable optical readout of the photorefractive gratings. The first is the two-color holography which is based on recording a grating by a long wavelength (IR) possible due to a non-equilibrium population of shallow levels at the expense of a short-wavelength pumping-over of electrons from deeper levels. The two-step photoexcitation via short-living photoinduced centers (‘gating’) is described in LiNbO3 and LiTaO3 of different compositions. An emphasis is given to the involvement of the intrinsic defects, namely intermediate small polarons occurring due to the photodissociation of bipolarons in reduced crystals. A UV-gated recording in LiNbO3 doped with optical-damage-resistant ions is described. An outline of data is given on certain combinations of impurities such as Fe and Mn in LiNbO3 which under a short-wavelength photoexcitation form long-living metastable states resulting in slowing down the optical erasure. Another method providing a nonvolatile readout is the thermal fixation of gratings based on screening the recorded electronic space-charge by species of the opposite sign (ions or photoholes) activated when heating to certain temperatures. The thermal fixation and the current models of this process in LiNbO3:Fe is described dwelling on the factors controlling the diffraction efficiency and storage times of a fixed grating. Particular attention is given to a discussion of protons as compensating charges in LinbO3:Fe. A short outline of available data on thermal fixation in other photorefractive crystals closes this chapter.

Diffraction Efficiency Photorefractive Crystal Recorded Hologram Ionic Compensation Recorded Grating
These keywords were added by machine and not by the authors. This process is experimental and the keywords may be updated as the learning algorithm improves.
This is a preview of subscription content, log in to check access.