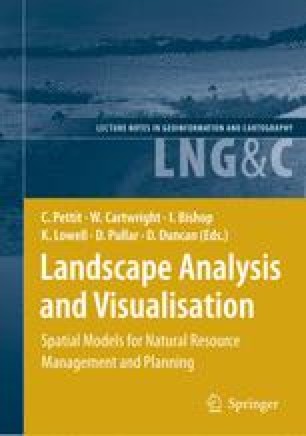 In Australia, many rural towns have experienced a loss of population in conjunction with the loss of buildings. These buildings can be considered to be key elements for appreciating the heritage of the development of rural living spaces. Demolishing buildings of note has assisted in the demolition of the ability for the current generation of Australians to appreciate the life style in rural towns. This problem has been compounded in peri-rural areas, where urban growth has exerted pressure in the demand for increased space. This can lead to heritage buildings and unique streetscapes being sacrificed to the demands of urban growth. Therefore there is a need to provide tools for better understanding the development pressures on rural and peri-urban areas, and tools as a means to appreciate these now disappeared environments. The use of virtual models of Australian towns can help people to visualise what exists and the pressures to develop. If these towns and environments have already been transformed, the use of virtual models allows people to visualise `how they might be' if the town had remained intact. This is seen as a potential tool for understanding what we have and the heritage we have lost — showing the current generation what these environments once were, or to demonstrate past errors to decision makers.

Many of these buildings have disappeared without a trace. Buildings removed in the haste to modernise or expand were not always properly recorded (if recorded at all) neither were the buildings measured or photographed for posterity. Therefore, how might visualisations be built from a combination of information about buildings that remain and those that do not? A project that captured images of existing buildings and sourced images, photographs, drawings, paintings and other data from archives and exhibitions, and then developed three-dimensional visualisations that merged all of these inputs was used to build a virtual environment for use to appreciate what built environments are, might be (if developments took place), and could be (if significant buildings were not demolished or removed).

This chapter describes three projects: one that built a virtual environment for the peri-urban township of Barwon Heads, Victoria, Australia (built for presenting planning development proposals to the residents of the township); an exploratory project in the City of Melbourne, Australia; and a project dealing with proposed urban landscapes in Sydney Road, Brunswick, Australia. As the Barwon Heads virtual environment presented the existing situation only, there was no way for users of the system to fully appreciate what would be lost if `breakout' development was allowed to occur that would forever destroy the unique characteristics that make up the fabric of this Australian township. The City of Melbourne project provided a composite three-dimensional model by combining imagery of existing heritage buildings with the ‘missing’ buildings of the city — those that were removed in the heady development days of the 1960s. The chapter considers whether the methods developed for the City of Melbourne project could be used as a model for developing better virtual environments for peri-urban and rural applications.

Virtual Environment Central Business District Virtual Model Rural Town Heritage Building
These keywords were added by machine and not by the authors. This process is experimental and the keywords may be updated as the learning algorithm improves.
This is a preview of subscription content, log in to check access.