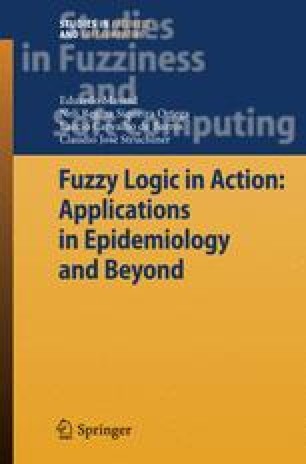 Fuzzy Logic in Action: Applications in Epidemiology and Beyond pp 181-206 | Cite as

As mentioned in the previous chapters, mathematical models are always subject to inaccuracies related to the nature of the state variables involved, parameters and/or initial conditions. In these models, the estimation of the parameters is usually based on statistical methods, starting from data obtained experimentally to the choice of the method adopted to their identification.

In biomathematical stochasticity can arise as an imposition of the state variable or due to some of the parameters, initially deterministic, but subjected to random fluctuations. These two cases are called demographic and environmental stochasticity, respectively (May, 1974; Turelli, 1986).

We propose in this chapter, to some extent, an adaptation of the concepts of demographic and environmental stochasticity, using fuzzy sets theory, an efficient tool to deal with the subjectivity that comes from the “fuzziness” of the biological phenomenon (Barros et al., 2000). Both concepts of demographic and environmental fuzziness can be analyzed by fuzzy differential equations or by fuzzy differential inclusion, since they are in essence dynamical systems. In chapter 8 the fuzzy rule-based dynamical systems were widely discussed with examples of SIS and SIR epidemic models. Here we present other ways to treat these epidemic models using differential equations and differential inclusions approaches.

Fuzzy Number Infected Individual Parasite Load Epidemic Modeling Basic Reproduction Number
These keywords were added by machine and not by the authors. This process is experimental and the keywords may be updated as the learning algorithm improves.
This is a preview of subscription content, log in to check access.