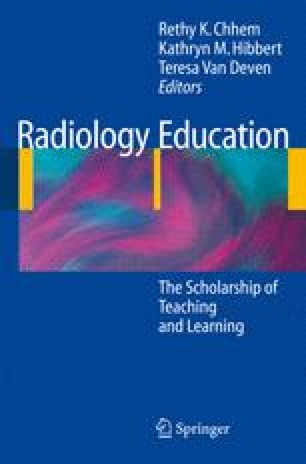 Imagine a scenario where a surgeon, oncologist, and radiologist at a research hospital work together to treat a cancer patient suffering from esophageal adenocarcinoma. After treatments of cisplatinum and fluorouracil administered by the oncologist, a round of teletherapy treatments from the radiologist, and a successful esophajectomy performed by the surgeon, the patient develops cauda equina syndrome (CES) weeks after the surgery which causes severely decreased mobility in his legs. The radiologist is perplexed by this and is interested in whether the megavoltage teletherapy treatments administered to the patient may have caused the CES. So, she sits down at her computer to do some research. She queries PubMed, MedNet, Dynamic MepPix, DynaMed, and MedlinePlus only to find a vast amount of disparate data from a variety of different sources. Not only is it difficult to find a set of relevant and precise terms, but she also has great difficulty discerning the connections between various seemingly related results. Further, regarding what little she does find, she must go to the journal’s Web sites, or to her university’s medical library, in order to piece together this disparate information for herself. She continues with a general Web search: there is something that looks vaguely relevant from a laboratory in Germany, but the researchers in that laboratory have not annotated any of their information for the benefit of other researchers on the Web; a laboratory in the Netherlands is composed of researchers with impressive publications in journals such as Radiology, Science, and Nature, but they deliberately choose not to make their results available on the Web, as they are vying for million-dollar research grants; still another laboratory in Columbia has what appear to be relevant conclusions that are available to anyone on the Web, but the researchers there have annotated their information in such a way that only other members of the laboratory can decipher it. Owing to this informational quagmire, the radiologist gives up her research and moves on to other projects. The surgeon and oncologist encounter the same sea of confusion in their own searches, and move on to other projects as well. Although the cancer patient is treated for CES, no reliably certain cause of the syndrome is discovered and, in addition to the complications due to his esophajectomy — such as gastric dumping syndrome — the patient’s right leg atrophies, becomes gangrenous, and must be amputated.

Domain Ontology Cauda Equina Syndrome Formal Ontology Open Biomedical Ontology Biomedical Information
These keywords were added by machine and not by the authors. This process is experimental and the keywords may be updated as the learning algorithm improves.

This work is funded by the United States National Institutes of Health (NIH) Roadmap for Medical Research, Grant 1 U54 HG0040208.