The World Market for Natural Gas 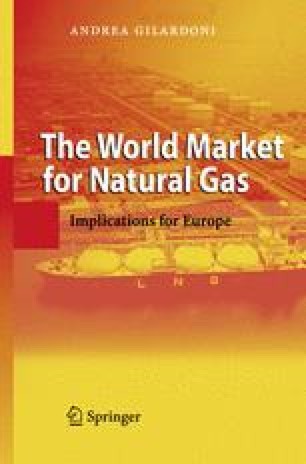 This Chapter deals with the corporate strategic models followed by the gas market leaders. The assumption is that the future trends of the industry will be highly dependent on the strategy adopted by a relatively low number of leading companies, and by their respective governments. This is particularly true if we consider that the past 5–10 years have seen considerable concentration in the industry, as well as important developments in the role of the various companies. According to Agici studies,1 in the mid and downstream phases the concentration process in Europe will lead to an oligopolistic energy market dominated by four to six big companies that bear a greater resemblance to the major oil and gas corporations. Despite this trend, the industry players remain numerous and with varying characteristics.

We have identified three separate groups of companies with differing, and sometimes alternative, features with respect to the gas chain, technological development, international presence, degree of diversification and public/private ownership.

The first cluster is composed of the ‘big sisters’, heiresses of the ‘seven sisters’. These are focused on upstream business and act as global players with a very strong, if not monopolistic, position on E&P technologies. The second cluster includes the major utilities, often the former national champions, which are pursuing a policy of vertical integration designed to reduce risk and secure gas supplies for their respective markets. The third cluster includes the state-owned companies which control the natural resources. These companies play a fundamental role in the industry, though it is true that they often depend on government decisions.

The private firms must also carefully consider the views of international governments. In many cases, it is hard to distinguish between corporate strategy and national political issues. Nonetheless, it appears that the various companies, even belonging to the same cluster, follow different approaches. Below we will attempt to describe some of these issues, well aware that we are simplifying a highly complicated situation.

Strategic Model Royal Dutch Shell Leading Player Strategic Driver National Nigerian Petroleum Corporation
These keywords were added by machine and not by the authors. This process is experimental and the keywords may be updated as the learning algorithm improves.
This is a preview of subscription content, log in to check access.