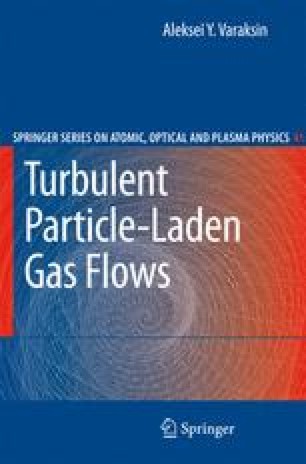 The chapter deals with solid particle-laden flows past bodies. This problem emerged as a result of studies of motion of various flying vehicles in a dustladen atmosphere, as well as of motion of two-phase heat-transfer agents in flow trains of power plants. The presence of solid particles may cause a significant (sometimes, many times over) increase in heat fluxes, as well as erosion wear of the surface subjected to flow. These phenomena are due to the combined effect of a number of reasons, which include the variation of the structure of flow incident on a body and of the characteristics of the boundary layer developing on the body subjected to flow, as well as particle/surface collisions, variation of the surface roughness, and so on. The intensity of the processes which accompany heterogeneous flows past bodies depends on the inertia and concentration of particles. Note that the inertia of particles depends directly on the geometry and parameters of flow and may vary in a very wide range for the same particles. The presence of different characteristic times (lengths) of carrier flow (in the vicinity of the critical point of the body subjected to flow and along its surface, turbulent scales proper, and so on) complicates seriously the study of such flows and generalization of data. As to the concentration of particles, its value may be many times the “initial” value in an unperturbed flow due to abrupt deceleration of flow on approaching the body, particle/ wall interaction, and interparticle collisions. When particles move along the surface in the boundary layer characterized by significant gradients of velocity and temperature (in the case of nonisothermal flow), their distribution is often complex, and the value of concentration is likewise higher than that in the flow incident on the body.

Boundary Layer Disperse Phase Turbulent Boundary Layer Carrier Phase Laminar Boundary Layer
These keywords were added by machine and not by the authors. This process is experimental and the keywords may be updated as the learning algorithm improves.
This is a preview of subscription content, log in to check access.