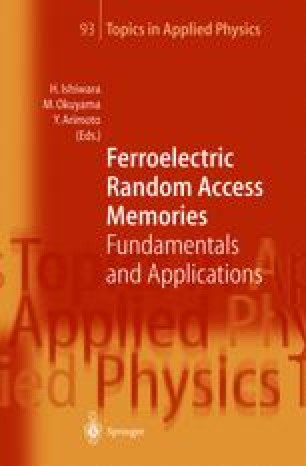 In this chapter, recent progress in our group in the area of thin-film ferroelectrics is reviewed. The specific focus is on nanoscale phenomena such as polarization relaxation dynamics and piezoelectric characterization in model thin films and nanostructures, using voltage-modulated scanning force microscopy. Using this technique, we show the three-dimensional reconstruction of the polarization vector in lead zirconate titanate (PZT) thin films. Secondly, the time-dependent relaxation of remanent polarization in epitaxial PZT ferroelectric thin films, containing a uniform two-dimensional grid of 90 domains (c-axis in the plane of the film), has been investigated extensively. The 90 domain walls preferentially nucleate the 180 reverse domains during relaxation. Relaxation occurs through the nucleation and growth of reverse 180 domains, which subsequently coalesce and consume the entire region as a function of relaxation time. The kinetics of relaxation is modeled through the Johnson--Mehl--Avrami--Kolmogorov approach, with a decreasing driving force. In addition, we also present results on investigation of the relaxation phenomenon on a very local scale, where pinning and bowing of domain walls has been observed. We also show how this technique is used for obtaining quantitative information on piezoelectric constants and, by engineering special structures, how we realize ultra-high values of piezoconstants. It is shown that the piezo-constant of free-standing nanoscale capacitors is much higher than clamped values, and that there is a complex interplay between the substrate-induced constraint and the piezoresponse. Lastly we also show direct hysteresis loops on nanoscale capacitors, where there is no observable loss of polarization in capacitors as small as 0.16 micro squaremeter in area.